Ben Christy moved to a quiet neighborhood on the west side of the Arkansas River in 1990 to enjoy the lifestyle of a seldom-visited, seldom-remembered part of Tulsa.

Then came Target. And Belk. And attention.

"It was really kind of nice because we were kind of secluded from everything," he said. "Now there's five stoplights between here and the river."

As west Tulsa residents learn to adjust and area leaders debate how to manage the growth, the Christy family, like countless others, shops at Tulsa Hills.

"Lately it's been just about every other day we go to either Sam's (Club) or Lowe's," Christy said. "I do kind of miss the old days."

When Woodland Hills Mall opened at 71st Street and Memorial Drive in the late 1970s, the area was a patchwork of rural and suburban communities. Bird, a young resident of the area at the time, found himself shopping where he once traipsed through the woods with friends.

"Look at all the development that spurred," he said.

Tulsa Hills - the largest shopping center built since then - is beginning to expand its footprint in the same way but possibly with a different outcome, Bird said.

Unlike the Woodland Hills area, he said, the terrain and infrastructure constraints of the Tulsa Hills area will prevent expansive retail growth. Residences will likely dominate the future development, he said.

"I think it's going to be a much more mixed-use area with this one concentration of retail really being the catalyst," he said.

Two apartment complexes have opened nearby since 2008, and the Stonebrook housing addition just east of the shopping center has filled out since its 2005 opening.

Meanwhile, the shopping center has filled out with stores like Bed Bath & Beyond and Dick's Sporting Goods, and restaurants like Hideaway Pizza and Buffalo Wild Wings. And the largest of three construction sites still available there is 23,000 square feet.

Locally owned European Wax Center is one of the newest businesses at Tulsa Hills.

After a slow start, business has picked up, Manager Jill Challis said Friday.

"We opened in October, so in Oklahoma that's not really the swim season," Challis said. "Because spring break is coming up, this last two weeks we have really come on strong. Today we have no openings."

Challis said owners Roy Adams and Kelli Owens hope to open five more European Wax Centers in Oklahoma but are pleased they began where they did.

"We are really happy that we chose this spot," Challis said.

Another development, The Walk at Tulsa Hills - a $35 million, 250,000-square-foot shopping center planned since 2010 at the southeast corner of 81st Street and U.S. 75 - is still alive, although a retail broker involved in the development declined to elaborate. At one time, a 12-screen movie theater was being eyed for the site.

"I think if we fast forward in time and look back at all the development that's going to occur off of there, I think people will say that it was certainly one of the top one, two or three retail developments in Tulsa's history," Bird said.

For west Tulsa residents, the availability of shopping close to home means less frequent trips to other shopping hot spots, such as the Woodland Hills area.

And that is invaluable, they say.

"We're loving that we have food places now," said Ann Hunt, who lives off 81st Street. "We finally have a place we can go shop and eat without going to Woodland Hills."

The development brings shoppers from as far as Bartlesville, Okmulgee, Henryetta and other communities also served by U.S. 75, as well as some from other parts of Tulsa, said Matt Crain, president of the Southwest Tulsa Chamber of Commerce.

Katy Edmonson and Emily Hitchcock, Sand Springs residents who shopped Friday at Tulsa Hills, said they consider it the closest and most easily accessible large shopping center to their hometown.

City retail marketing coordinator Tammy Fate said the city cannot track exactly how many out-of-town shoppers frequent the development but that retailers tell her the number may be significant.

Tulsa Hills has generated $24.37 million in sales tax, but $8.1 million has gone to repay city-issued bonds used as part of a Tax Increment Financing district.

In 2006, the proposal to develop Tulsa Hills faced little opposition when it was presented to the Tulsa Metropolitan Area Planning Commission and City Council. Minutes from the March 9, 2006, City Council meeting show just one person spoke in opposition to granting the needed rezoning for the project.

But seven years later, with concerns over traffic and increased interest from developers, the city is wrestling with how to accommodate the surge in construction while maintaining the area's rural roots.

Late last year, councilors discussed briefly the possibility of imposing a moratorium on the construction of new apartment complexes in the area.

In December, they tabled a controversial plan to construct a 596-unit apartment complex near the northeast corner of Union Avenue and 71st Street until the small area plan for the area is completed.

Planning Director Dawn Warrick has said previously that the plan is intended to strike a balance between the interests of developers and the interests of those who live in the affected area.

One main desire has been to have a "buffer" between existing quiet neighborhoods and potential apartment complexes, Crain said.

West Tulsa resident Kaye Price, a vocal opponent of further development, feels that Tulsa Hills is as far as west Tulsa should take its growth.

She said that when the shopping center was proposed, she "jumped on it like a stink on a June bug," but now fears additional development will destroy the rural setting homeowners have known for generations.

"The rural issue is huge for people," Crain said. "They just don't want to lose the rural character."

In John Collett's eyes, Tulsa Hills was never about simply finding another location for a Target store. He needed big box stores for the project to work, of course, but he also had to give the stores something back: the promise of growth around them.

After all, even those huge stores would not come close to filling the 160 acres he had under contract in the early 2000s.

"It was too remote at the time," Collett said. "We had to convince them: 'Hey, guys, we're going to build one million square feet' " of retail space.

And he did. After getting Target on board, he persuaded Lowe's to sign on, and then Belk. Before he knew it, he had some momentum.

But Collett said it still took time to sell city leaders on his idea - particularly when it came to creating a Tax Increment Finance district, which would eventually be used to redirect much of Tulsa Hills' sales tax revenue to repay city-issued bonds used to fund infrastructure there.

Then-Councilor Bill Martinson voted against it, arguing that taxpayers had already invested $17.4 million on infrastructure improvements to make the area attractive for development. The city had built a water line to the area for that purpose in 1997.

As part of the TIF agreement, the city agreed to spend up to $13.5 million for street, water, drainage and sanitary sewer improvements. Another $765,000 was earmarked to pay Jenks Public Schools for lost property-tax revenue.

Collett said he and his partners have spent $100 million to $125 million developing the project, including $33 million to prepare the land for development.

"If it wasn't for the local government in Tulsa, who were extremely helpful and who did approve that TIF, this wouldn't have happened," he said. 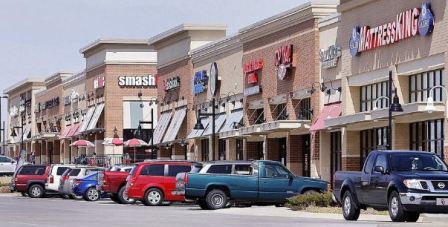