The Crust Pizza has made its Charlotte debut. The family-owned pizza restaurant recently opened at ParkTowne Village in the Montford Park neighborhood.

Owner George Kanellopoulos says he invested over $2 million into that 6,200-square-foot restaurant. He renovated and combined two spaces at 1600 Woodlawn Road — including the former Libretto’s Pizzeria spot. The restaurant has a 70-seat patio that’s partially covered and heated.

“We’re not building it for the average lifespan of a restaurant,” he says. “I’m building this to be here for decades.”

Kanellopoulos says the goal was to create a family-friendly spot that is comfortable, inviting and clean. He proudly notes The Crust earned a score of 100 on its first health inspection — and it will continue to strive for perfection.

He and wife Laura founded The Crust in Naples, Florida, nine years ago. Today, the operations include their children, Callista, Anni and Alek.

The Crust got its start when the family — originally from Ohio — couldn’t find the style of pizza they liked after moving to Naples. They created their own version, and with the support of friends and neighbors, launched The Crust.

“People crave our pizza,” Kanellopoulos says. “There is no restaurant here that offers the pizza we have.”

What to expect from The Crust Pizza in Montford Park

Its house-made dough is made fresh daily. The Crust’s pizza features a crispy bottom, fluffy — bubbly — middle and soft top. It is lightly sauced before being loaded with toppings, Kanellopoulos says. For example, its pizza squares will have pepperoni from edge to edge.

“We are very, very generous with our toppings. No matter how many toppings you order. We feel that in every bite you take should be part of those toppings,” he says.

Subs such as the Italian, veggie and meatball — made with the family recipe — and made-to-order salads round out the menu. The scratch-made kitchen also prepares its marinara and dressings such as champagne vinaigrette, Caesar and creamy Parmesan.

“We make it very simple — pizza, subs and salads,” Kanellopoulos says. “We make everything to order. It doesn’t matter how busy we are.”

There’s beer and red and white wine available as well.

The average ticket price is $18 to $19 per person, with takeout available. Kanellopoulos says he’s focused on delivering value. The Crust aims to be a destination drawing frequent repeat business.

Kanellopoulos projects first-year sales will be between $3 million and $4 million.

The restaurant was designed to be family-oriented, Kanellopoulos says. Tables are spaced further apart to encourage conversation. There’s plenty of booth seating as well.

“We work extremely hard for this,” Kanellopoulos says. “Everything there we renovated from studs to studs.”

The Montford Park location is similar to the family’s 7,000-square-foot restaurant in Naples, Kanellopoulos says.

The Crust mapping out expansion plans in Charlotte

The Crust Pizza already has plans for additional locations in Charlotte.

It’s signed a deal for a standalone restaurant at Providence Road and Ballantyne Commons Parkway. Construction of that 5,600- square-foot location is set to begin in January.

Kanellopoulos also plans a takeout version of The Crust in the former Mr. K’s spot in South End. He anticipates filing for permits soon for that project. “I believe in the market,” Kanellopoulos says. “We plan to expand through the city and the state and possibly in South Carolina.”

The Parktowne Village restaurant is open seven days a week. Hours are from 11 a.m. to 9 p.m. Monday through Thursday; 11 a.m. to 10 p.m. Friday and Saturday; and noon until 9 p.m. Sunday. 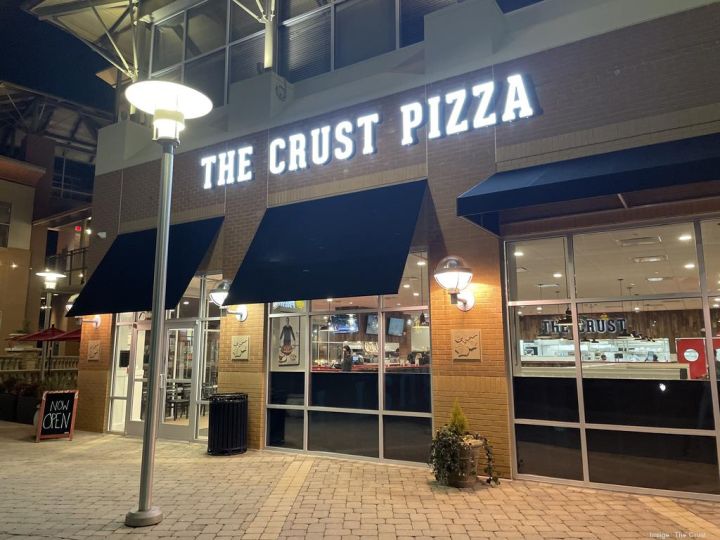