Two local companies are behind the latest big developments proposed for downtown Greenville – a seven-story hotel at The Greenville News site and a five-story building at the entrance to Falls Park that would include shopping, a restaurant, offices and housing.

Greenville-based JHM Hotels plans to build the hotel directly across Main Street from the Peace Center, according to plans on file at City Hall.

The hotel would include a terrace, restaurant and bar/lounge.  The brand would be AC Hotels by Marriott, which isn’t currently in Greenville.

The brand started abroad and now includes more than 75 locations throughout Spain, Italy, Portugal and France, according to the Marriott Web site.

The first AC Hotel in the United States opened in New Orleans in November, and another opened at Washington, D.C.’s National Harbor last month.

Marriott says it plans more than 50 AC Hotels in the United States and Latin America over the next three years.

The AC Greenville Hotel would be part of a larger, previously announced development at The Greenville News property, which is under contract to be sold.

The larger development, called Camperdown, would include three other high-rise buildings – two office buildings and an apartment complex – arrayed around a center plaza.  The plans for Camperdown also include condominiums, a dine-in movie theater and a fitness center.  The AC Greenville Hotel would be built next to a proposed all-glass building at the corner of Main and Broad streets.  On the other side of the hotel would be a grand staircase leading from the Main Street sidewalk to the proposed plaza.  A five-story building is planned by Greenville developer Phil Hughes on what is now a parking lot at the corner of Main Street and River Falls Drive, which until recently was called Camperdown Way.

The quarter-acre site is next to a Subway restaurant and directly across Main Street from the entrance to Falls Park.  Hughes’ company, Hughes Investments, is a stone’s throw away in the Riverwalk high-rise.  The proposed new building would be called Falls Park Place, according to plans on file at City Hall.  The first two floors are reserved for retail and restaurant space, while floors three and four would house offices and housing.  The fifth floor would be housing only and include a wrap-around terrace.  The plans also call for a rooftop terrace with a pool and bar.  The building’s exterior would be limestone and granite on the bottom two floors.  The exterior on the upper floors would be pre-cast concrete resembling limestone.  The city’s Design Review Board would have to sign off on both developments 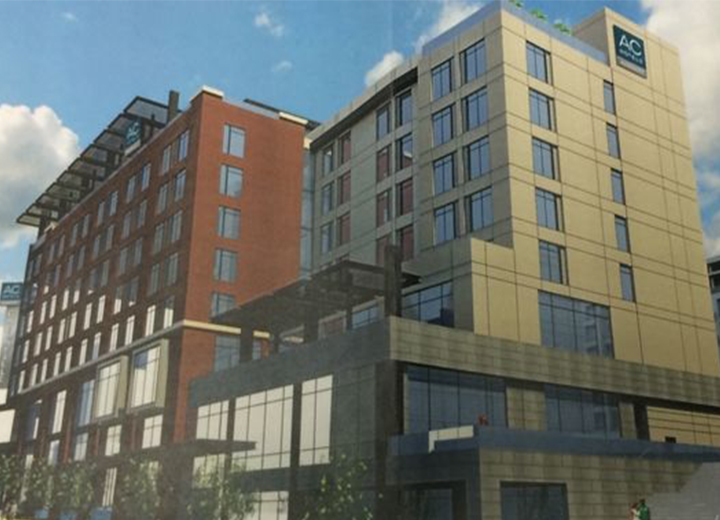