Lawton business leaders and dignitaries celebrated the official grand opening of the Lawton Town Center Wednesday with an outdoor gathering at the heart of the 2nd Street development.

"We couldn't have done this without a unified community," said Lawton Mayor Fred Fitch. "We accomplished what we set out to do. We're not finished yet, but we passed the initial test."

Fitch introduced John Collett, the developer behind the project, calling him "our knight in shining armor." Collett told the crowd gathered in the evening hours how he and his firm "went into hibernation" following the 2008 financial crisis, which forced the previous developer to back out and the project to stall. When he came to Lawton and saw what was being proposed and what the members of the community had in mind for Northwest 2nd Street, he knew he wanted to sign on.

"I was like 'wow, this could be really fun,'" Collett said. "I have to be honest, I wouldn't have come out of my shell and deal with this if I didn't have a passion for it through the people we worked with here."

The Lawton Town Center is currently at 93 percent capacity with 207,000 square feet leased. Collett is currently negotiating with a couple of restaurants to fill some of the remaining spaces, but didn't go into details. Work has already begun on clearing off the land north of the current development and he said he's in preliminary negotiations with additional tenants to move into that area once it's developed. His ultimate plan is to move to the west side of the street and develop the area between Northwest Arlington Avenue and Ferris Avenue. If future sales remain at their current levels at the newly opened retailers, Collett doesn't see much of an issue. 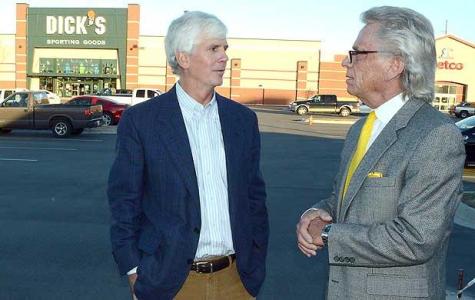