Affiliates of Collett & Associates LLC sold two of the sites, Prattville Town Center in Prattville, AL for $27 million and NorthCrest Shopping Center in Charlotte, NC for another $27 million. Prattville is about 170,000 square feet and includes tenants such as TJMaxx, PetSmart and Books-A-Million. NorthCrest totals 133,674 square feet and has tenants such as REI Sports, Old Navy and Five Guys Burgers. Both of the centers are shadow-anchored by Target stores.

Matthew Tice from IREA tells GlobeSt.com that the Collett properties have strong anchors and demographics. “We’ve watched these sites for several years, and watched them go through cycles with the tenants, and they continue to be strong assets. It’s a good play for a long-term hold,” Tice says.

He says that his firm is negotiating for four more properties in the portfolio, though he said he couldn’t reveal too many details. “We should be closing in the next 120 days,” Tice says.

The third center, purchased from an unnamed owner, is Village at Bay Park for $16.7 million. The 180,700-square-foot center in Ashwaubenon, WI is 96% occupied with tenants such as JC Penney and DSW Shoes.

Inland also said it is looking to buy Landstown Commons Shopping Center in Virginia Beach, VA for about $91.2 million. The 409,749-square-foot center 94.4% leased to 62 tenants that include Best Buy, Bed Bath & Beyond and Office Max, as well as 32,890 square feet of offices. It is not clear if the Landstown purchase is one of the unnamed portfolio properties already being considered.

Tice tells GlobeSt.com that there is competition in the market for quality retail properties, but many companies are being pickier than usual about closing deals. “They are sticking to specific deal issues, such as geography, whereas some people may not want to be in North Carolina vs. being in Texas, which is hot right now. It still comes down to location and your reputation,” he says. 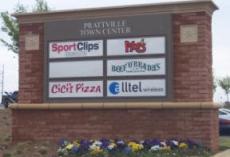