Chances are, if you know the difference between ceviche and crudo or tartare and carpaccio, you didn’t learn that at the local meat ‘n’ three.

Raw seafood (ceviche and crudo) and beef or tuna (tartare and carpaccio) are often relegated to the fine-dining category in our part of the world for a variety of reasons. For starters, if you want to serve it raw, you have to seek out higher-quality ingredients, which mean a higher price. Another is simply a matter of exposure: raw animal proteins are not a regular part of the average Southern diet.

Still, the times, they are a’changing.

Think of it as deconstructed sushi in a bowl.

And what started out as a simple snack for fishermen — who has better access to fresh seafood, after all? — has become one of the hottest dishes across the nation.

Currently, poke is a regular menu item at a handful of area restaurants — Happy + Hale, Takosushi, and Bonefish Grill, for instance, and part of a rotating menu at Golden Brown & Delicious and The Anchorage. Spartanburg landed its own poke-focused joint, Pokenori, a few months back, but Greenville is still lacking in that area. But not for long.

Poke Bros. currently has two locations in the Columbus area, as well as two in the Columbia, S.C., area. The chain was founded in 2015 by T.J. Wellman, Scott McCarthy, and Xuegong Chen, all of whom had been involved in the seafood industry for years and had previously opened Asian bistros in Ohio. They discovered poke during a trip to California, and with their industry connections, it wasn’t long before they launched Poke Bros., bringing in fresh fish every day to the Midwest.

“There isn’t a whole lot of seafood here,” McGlone says about the Columbus area.

Poke Bros. creates its own sauces and marinades that range from mild to spicy, and all of its bowls are customizable. There’s even tofu and chicken options.

“You always have that one friend or family member who won’t do seafood,” McGlone says, explaining that the founders are tuned in to customer feedback.

In the meantime, however, if you’re new to poke and want to give it a shot before the new store opens, there are some options.

Located across the street from Falls Park, Happy + Hale offers an ahi poke bowl ($10.95) with raw ahi, avocado, sticky rice, sliced scallion, tuxedo sesame, ginger wasabi, and citrus ponzu dressings. As with most H+H menu items, the bowl can be customized with less rice for the carb conscious, additional mixed greens, and extra sauce. You can even substitute tofu for the tuna.

Takosushi, 34 S. Main St., has an ahi poke ($11) appetizer. It’s served on a plate with red onions, scallions, sesame oil, soy sauce, salt, and pepper over rice with strings of rutabaga and beet as a salad.

For a locally owned option, keep a social media eye on GB&D and The Anchorage. You never know when poke may show up on the rotation, but both are worth a last-minute change of dinner plans. 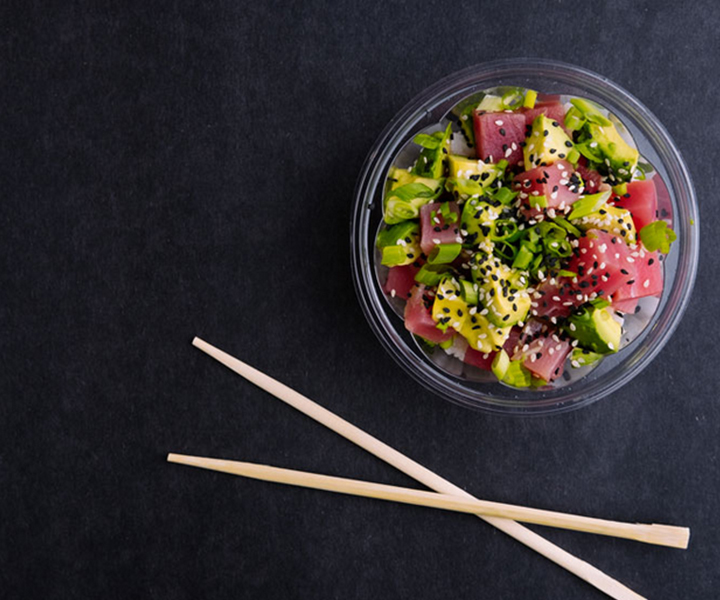