About 80 percent of the retail space available in Phase II of the Schulman Crossing retail development already has been pre-leased to tenants, the project developer said Tuesday during an official groundbreaking ceremony.

"That's probably the most pre-leasing we've ever done in advance. The good thing is we've got a lot more to do, there's going to be more announcements," John Collett, president of North Carolina-based developer Collett and Associates, said.

Seven major tenants have been announced for the shopping center that will be located north of Menards. They include T.J. Maxx, Petco, Cato Fashion, Dick's Sporting Goods, Hobby Lobby, Ross Dress for Less and Ulta Cosmetics.

Collett said there's another 30,000 to 35,000 square feet of space available on the north end of the project for an eighth major tenant, as well as additional property to the west that Collett intends to fill up, though he had nothing new to announce Tuesday.

"We've announced all the tenants that we've signed up so far," he said.

However, Collett indicated developers also are looking for smaller shops that could house tenants like Panera Bread or Chipotle Mexican Grill.

"We don't have Chipotle, but we're targeting the Chipotles, the Paneras. Those type of tenants are who we're going to try to get here to have a good mix of restaurants, small shops and boutiques that make for a great shopping center," Collett said.

Tuesday's groundbreaking ceremony included the entire Schulman Crossing project, which includes the new retail center, as well as the Menards store completed in June, that altogether will add more than 400,000 square feet of retail and dining space to Garden City.

Schulman Crossing Phase II alone will add more than 200,000 square feet of retail space. Site work got under way last month and building construction is anticipated to begin before the end of this year with stores expected to be open sometime in late summer 2014.

"This is going to be the epicenter and retail vortex for western Kansas," Collett said. "There's no way for any other city out there to compete with what already was here and what we're putting here. That's a good thing for us and a good thing for your city."

Roy Cessna, Garden City vice mayor, spoke in the absence of Mayor Dan Fankhauser, who was out of town on Tuesday.

"What a great day to be in Garden City," Cessna said. "This development bodes well for our community as it will continue to enhance our standing as a regional center for western Kansas. The new stores and the jobs they create will be good for our economy and will enhance our draw from surrounding communities, just as Menards has done."

Matt Allen, Garden City city manager, said while Schulman Crossing tends to be known as a city project, it took a lot of community and state support to make it happen. Allen recognized city and Finney County commissioners, Garden City Community College, USD 457, Finney County Economic Development Corp., Downtown Vision, the Garden City Area Chamber of Commerce, the city's senior management team and staff, and the Kansas Department of Transportation for supporting the project and the investment in infrastructure improvements.

"Projects of this magnitude don't just happen quickly or by the work of one or two people," he said. "It really takes a community to do a project this big, and certainly this project represents that."

Allen also talked about how Schulman Crossing came to be the name of the development. In doing some research, Allen and city staff learned of Frank Schulman, a mayor and city commissioner more than 50 years ago who owned a hardware store and was a big advocate for economic development even if it might infringe on his own business.

"How fitting ... this project at full development turned out to be anchored by a hardware store/lumber business, that it should be called Schulman Crossing and capture that willingness to take risk. That spirit of innovation was alive and well then and is alive and well now," Allen said.

Collett said two and a half years ago the company paid a visit to Garden City and left energized about making Schulman Crossing a reality. It was the first large real estate project the company began following the major national recession.

Getting Menards under way, putting in infrastructure with Lareu Street and the Schulman intersection at the bypass were critical in marketing the rest of the development, Collett said. Each of the major tenants visited Garden City and liked what they saw.

"The great thing is we don't have a bad piece of real estate left to lease," he said. "All this property is well positioned; it's just a matter of filling it up. There's a lot of vibrancy here, a lot of great things happening. It's an ideal piece of property. 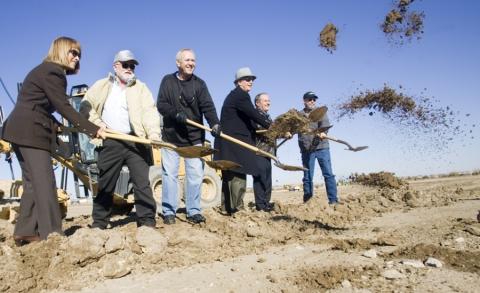