Crowd comes out for opening of Ollie's on west side

Some of them came to meet NBA Hall of Famer David Thompson, who signed autographs and took pictures with 250 lucky fans, while others combed the nearly 30,000-square-foot store for discounts on thousands of items.

The Spartanburg location is the Harrisburg, Pa.-based retailer's first store in South Carolina and the 107th addition to operating network in 11 Eastern states. The company has hired more than 50 people to work at the store.

“This feels great,” said Ollie's Bargain Outlet President and CEO Mark Butler. “Obviously, Spartanburg loves a bargain. The sense of excitement is pretty cool. During the current economic times we are in, people need a bargain.”

Butler, a sports nut who is co-owner of the minor league baseball team the Harrisburg Senators, enlisted Thompson to help promote the new store. Butler said he met the former Denver Nuggets and Seattle SuperSonics star in Los Angeles.

“He knows what this means,” Butler said, “and he was excited to be here. Every opening is special, and we typically do something like this to celebrate.”

“This feels great,” said the former collegiate basketball standout at North Carolina State University, where he led the team to a national championship title in 1974. “A lot of people from Shelby come to Spartanburg to shop so I'm happy for them. I think it will do really well here.”

Thompson said he knows that unemployment rates remain high in the region and was happy to see a company seeking to help residents meet tight budget demands.

“During this day and time, people need a break. … They need a bargain,” he said.

Butler said the company chose Spartanburg and South Carolina because they were the next logical step in its plan for contiguous growth. He hopes to open up to seven more stores in the state's major cities by the end of 2012.

Although the store didn't open until 10 a.m., shoppers began lining up out front at about 7:30 a.m. The first 250 people received a free ticket to meet Thompson, who was inducted into the NBA Hall of Fame in 1996.

A jazz band crooned Dixieland tunes to shoppers as they stood by the front entrance.

Inside the store, shoppers found savings of 30 percent to 70 percent off the regular price on a variety of brand name merchandise.

“Finally, I won't have to go to Costco for everything,” a woman in the crowd shouted.

Spigner, who lives near the store, said he was pleased with the turnout and plans to return as a customer.

Ollie's gets most of its merchandise directly from the manufacturer via closeouts, surplus and salvaged items.

In addition to its low prices, the company is known for its customer loyalty program, “Ollie's Army,” which Butler said has more than 3 million members.

Under the program, customers earn points when they shop at Ollie's stores. When they accrue 250 points, the company sends them a discount certificate in the mail.

Ollie's has a “no hard time” guarantee that allows customers to return purchases for any reason within 30 days for a full refund as long as they have a sales receipt.

“We have a saying here: We're the few, the cheap and the proud,” Butler said. “We're happy to be here in Spartanburg.” 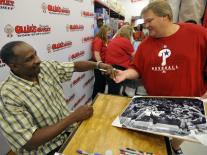 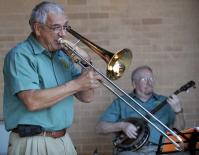