What’s going on today in Charlotte dining? A renaissance? Or maybe an actual turning point?

Since late August, not one, not three, but 10 chefs of note have opened or are about to open restaurants around town.

The wave began with Tim Groody, a chef known as a champion of local produce, and his Fork! in Cornelius. It continues with the same-day debut on Thursday of Tom Condron’s Lumiere and Bruce Moffett’s Stagioni and forges on with the March opening of Cassie Parsons’ farmer*baker*sausagemaker in Lincolnton. Nearly all are owned by the chefs, each of whom has a significant résumé and an eye toward driving cuisine forward in Charlotte.

“Has there ever been a point that so many different restaurants have opened up at once?” asks Matthew Pera, a Charlotte native who’s worked in restaurants here since 1985. Pera is partners with Condron in the fine-French Lumiere as well as the 4-year-old Liberty gastropub in South End. “There have been restaurant bursts – in 2000, and the late ’90s, a lot of chain stuff happening – but as far as smaller, interesting and frankly more quality-driven places, this is certainly the apex.”

Tom Sasser, Charlotte chapter representative for the N.C. Restaurant and Lodging Association and founder of Harper’s Restaurant Group, begun in 1987, sees it as the result of three factors: the improving economy, good marketing of the city and the maturing of the three culinary schools in town. “You’ve got all those things converging.”

Exactly, Pera says. “We, like everyone else, have been sitting, waiting, watching for things to start feeling better, for there to be some sense of onward and upward,” he says. “And there’s finally a demand for new stuff.”

Patty Dowdy, a Charlotte restaurant broker for four years (and is the daughter of decades-long broker Bob Dowdy), says, “Food is so popular right now, the economy’s doing better, and maybe there’s a generation of people ready to go out on their own now.”

Chef Moffett – whose Barrington’s (perennially tops in Zagat’s list of Charlotte restaurants) opened in 2000, followed in 2008 by Good Food on Montford – sees it essentially as a resource issue. As in: He’s finally got enough.

“I found a little renaissance of kids (coming out of the culinary schools) who are hungry and understand the pay scale, who are emphatic, enthusiastic and know why they’re there. ... It made me a lot more comfortable expanding because there’s a labor pool here now.

“I have a lot of resources to pull from, and I haven’t had that in the past.”

Lease costs became more reasonable, too, he says, and “there are spaces in decent locations.”

He’s in a historic spot in Myers Park, but others have found venues in outlying areas they feel are newly welcoming to more progressive cooking.

Like Groody in Cornelius, Parsons in Lincolnton, and longtime private-club chef Paul Verica in Waxhaw, where he opened Heritage Food & Drink last month.

“I’d probably pay double if I was in Charlotte,” says Verica, who brought a résumé honed in Washington and Philadelphia to the city 15 years ago. The growth in sophistication in the market since then is “awesome,” he says. “I look at everybody’s pictures, since we all post on Facebook, and there’s none of us, stylistically, doing the same thing. ... This time is different.

“And I know there’re more guys out there thinking about taking the plunge.”

Luca Anunziata plans to open Passion8 in Elizabeth, moving his successful Fort Mill, S.C., original to a place with more room, where he’ll expand on his local-centric fare tinged with Italian and other influences. Chris Coleman, who spent nine years at the by-reservation-only McNinch House uptown, is creating a new concept to open in February at his new job: culinary director for the Dunhill Hotel.

Kent Graham, a chef who debuted this year at Block & Grinder in Cotswold doing all manner of meaty things, is preparing to open littleSpoon in Myers Park for owner Alesha Sin Vanata. (A self-described “culinary autodidact” who had been doing culinary production and food styling for TV in Los Angeles, she writes that she is at work on three additional concepts or Charlotte.)

Also from out of town is chef Michael Shortino, who opened BAKU for an investment group in September, a restaurant specializing in the special Japanese grilling technique called robata.

On the way is Food Network star chef Rocco Whalen, who is opening a second location of his own funky, founded-in-Cleveland Fahrenheit, in February at the Skye Condominiums uptown. Charlotte’s “an exciting city,” he says.

Indeed – even for young chefs new to ownership ventures, agrees Amy Kumpf, a 2010 Charlotte Johnson & Wales graduate. She worked her way up to sous chef at fine-dining-seafood Upstream before leaving to start the more casual Flipside Cafe in Fort Mill this month. Opening a place, in her opinion, “is the thought of every person who comes out of culinary school.”

Here and now is what she, like the others, seeks: “something with a chance to grow.”

“People are getting excited,” Moffett says. “We’ve just had bankers. Now we have bankers and energy people and people who travel, and slowly but surely we’re getting a bigger customer pool. ... People are starting to understand (and) respect what we do here, as opposed to just what people in Charleston are doing.

“Who knows? It could be really exciting.”

“I mean, you’ve got a robata bar in Charlotte! Come on!" 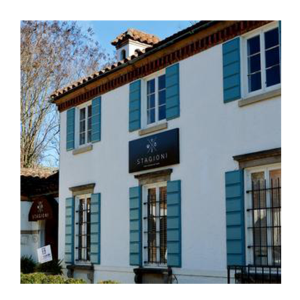